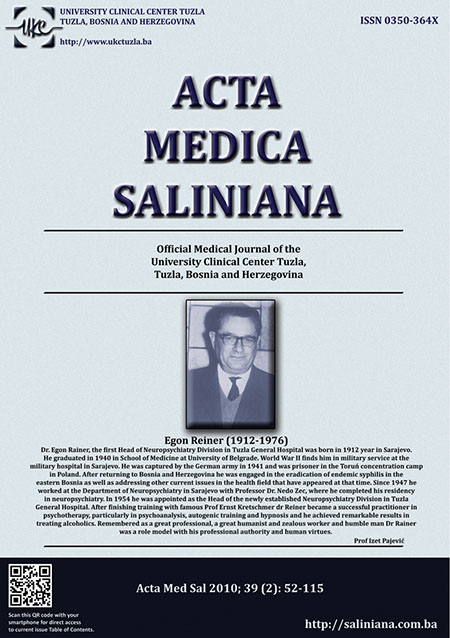 Dr. Egon Rainer, the first Head of Neuropsychiatry Division in Tuzla General Hospital was born in 1912 year in Sarajevo.He graduated in 1940 in School of Medicine at University of Belgrade. World War II finds him in military service at the military hospital in Sarajevo. He was captured by the German army in 1941 and was prisoner in the ToruÅ„ concentration camp in Poland. After returning to Bosnia and Herzegovina he was engaged in the eradication of endemic syphilis in the eastern Bosnia as well as addressing other current issues in the health field that have appeared at that time. Since 1947 he worked at the Department of Neuropsychiatry in Sarajevo with Professor Dr. Nedo Zec, where he completed his residency in neuropsychiatry. In 1954 he was appointed as the Head of the newly established Neuropsychiatry Division in Tuzla General Hospital. After finishing training with famous Prof Ernst Kretschmer dr Reiner became a successful practitioner in psychotherapy, particularly in psychoanalysis, autogenic training and hypnosis and he achieved remarkable results in treating alcoholics. Remembered as a great professional, a great humanist and zealous worker and humble man Dr Rainer was a role model with his professional authority and human virtues.